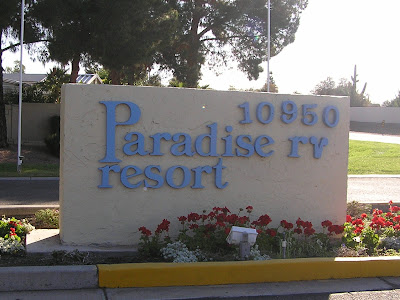 Last Sunday we moved north from Casa Grande to Sun City, Arizona, northwest of Phoenix. This is a very nice ROD park, however they do not have pickleball courts. We came here this week to watch the Senior Pickleball Olympics. They are being held about one mile up the street at a public park. 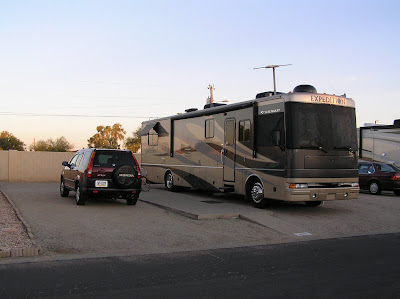 This is our site at the park. The sites are nice and large and each has a cement pad. We are in the dog area so Kate has lots of grass to "do her thing". Keith & Marie are parked beside us. 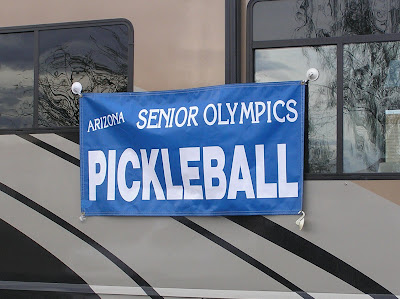 On Sunday afternoon after setting up we headed over to the pickleball courts. We watched the rookies play. Anyone who has never played in a tournament is considered a rookie and must first play to receive a skills level rating. You are then placed in the tournament according to your level of play. We had several friends who were in the tournament and it was so much fun reuniting with them and meeting new friends. Also since we had never played in or been to a tournament we learned how they are run and what is involved to play. 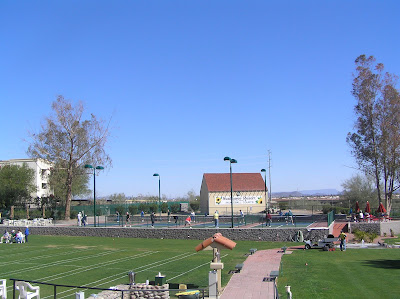 On Tuesday we went to another RV park to play pickleball since there are no courts at the park where we are staying. Our friend Larry was staying at Sunflower RV Resort where they have 4 new beautiful courts. He and his partner Don wanted to practice for the tournament so Harry and Keith played against them for a long time till they were worn out. Larry and Don won all the games but Harry and Keith did manage to score several points in most of the games. Anyway we had a great time and it was a beautiful day. 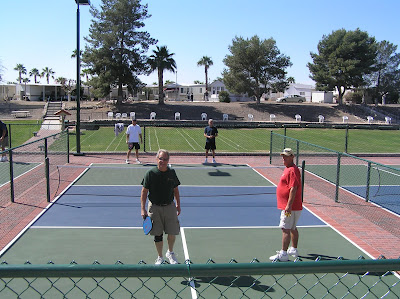 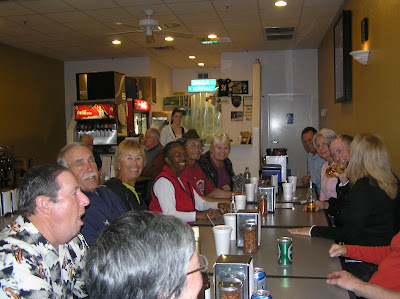 That evening a group of players and friends got together for pizza at Deno's Pizza. On the right in the black top (facing away) and the man next to me are Wayne and Nancy. They spend their winters in Arizona at Happy Trails. This is a beautiful hugh RV community with lots of pickleball playing. They are partly responsible for us coming to Arizona. We had a wonderful time meeting and talking to all these people who were so friendly and fun. The pizza was good too! 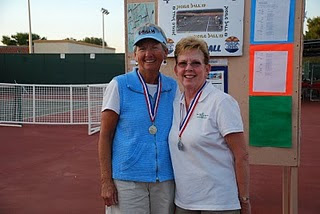 On Wednesday we spent the whole day watching the Senior Olympics. Here is friend Pat, on left and her partner Joyce. They won silver medal in their skill level. Way to go girls! 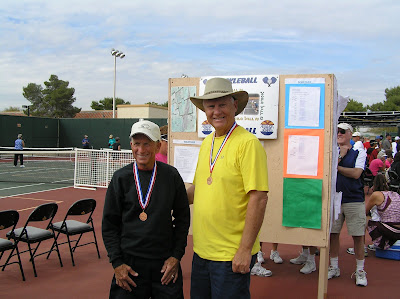 This is friend John on the right with his partner Ken. They won bronze in their skill level. Congratulations guys! John and Pat, in previous picture are married and Ken and Joyce, Pat's partner are married. 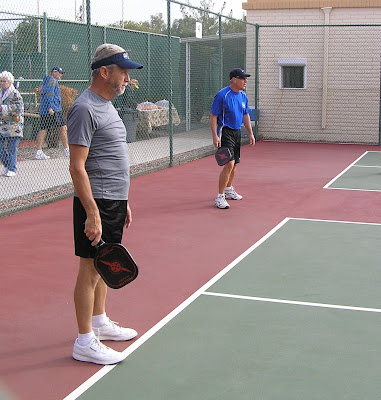 Here are Larry and Don in the tournament. They did not medal but put up a great fight. 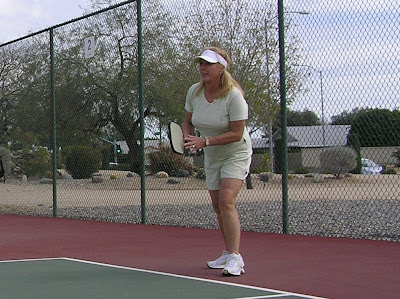 Here is Nancy playing. I did not get a picture of her partner. They did not get a medal but Nancy is a great player and a very good teacher of pickleball. 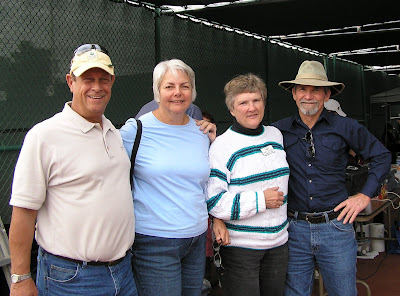 This is a couple that we just met at the tournament. They are Marti and Norman. Harry and I were asked by Dawn and Carlton Lutz to look them up at the games and give them a hug from them. That was easy since I am married to "the hugger". Dawn and Marti adopted each other as sisters, and Harry adopted Carlton as a big brother. So I guess that makes us one big family. We really enjoyed meeting Marti and Norman and can easily understand why Dawn and Carlton are close to them. Carlton and Dawn we really missed you being here with us. 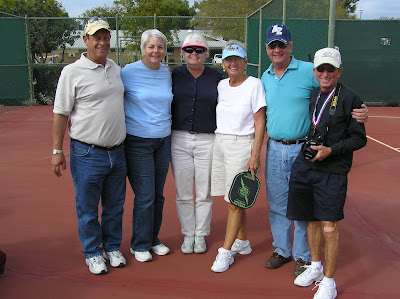 Harry, Karen, Marie, Pat, Keith and John. What fun it was being with friends and having a new experience at the Senior Olympics. We knew several other people who played but did not get their pictures. There were 16 courts going at one time throughout the tournament. The ages ranged from 55 to 85. 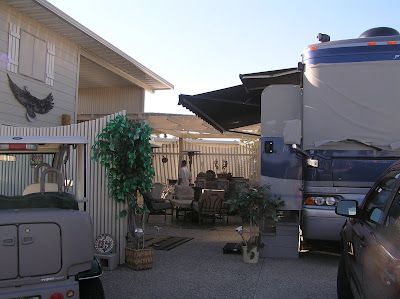 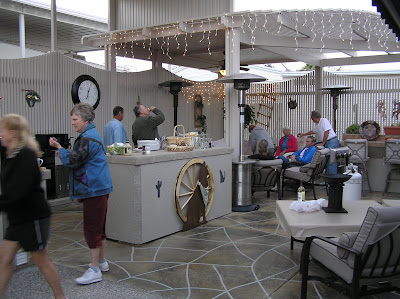 This is part of the outdoor kitchen area. It is decorated so beautifully and is very inviting and comfortable. Nancy prepared a delicious turkey, Cesar Salad and cranberry sauce. Marti brought a very good stuffing that went great with the stuffing. And we topped it off with Nancy's baked apples. Which we call apple dumplings. 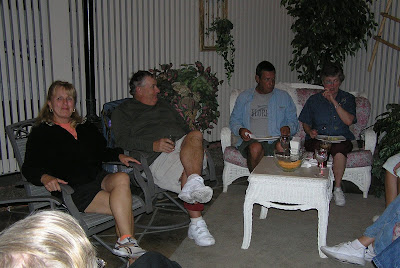 Nancy and Wayne our host and hostess on left. Harry and Marti on the sofa. Harry and I met Wayne and Nancy at TT Chesapeake two summers ago when they had traveled east. They tough us so much about pickleball and really helped improve our playing. That is---when we apply what they said! We are so fortunate to have met them and thank them for all they have done for us. They are graciously invited us into their group of friends and their home. 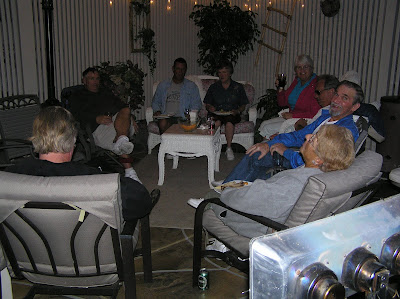 The man on the left with his back to the camera and the lady on the right front are Jetty and Bob. We met them at Hershey TT on the pickleball courts. They ran the Senior Olympics. What a job----my hats off to them they did a fantastic job. In the bottom right corner is a heater. It was a beautiful 74 degree day but as soon as the sun goes down it gets quite cool and the heaters really felt good and made it very comfortable to be outside till 8PM.


It was a great fun week and we had beautiful sunny days. What better way to spend a week than with friends.