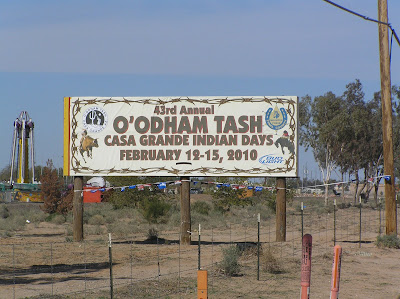 Around the corner from the campground we are in was the annual O'Odham Indian days festival. The O'Odham was an Indian tribe with descendants still in the area. Every afternoon during the festival they have a rodeo. All participants must be of Indian decent. Never having been to a rodeo we decided to walk over and see what it was all about. It was a beautiful warm sunny day perfect for sitting outside and watching. 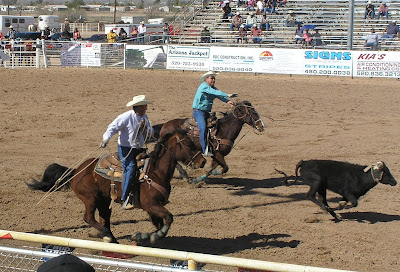 First was the roping events. The steer is released from a shoot with a roper on either side. The first roper attempts to lasso the head and the second roper then lassos a leg. Most of the time the steer gets away. 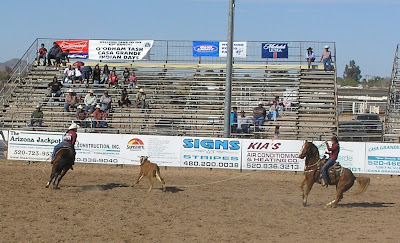 The men went first and then it was the women's turn. These two cowgirls were successful. The steer is not hurt and as soon as they are roped the ropes are let go. These small steer are raised just for this sport of roping. They are bred for the correct size and the correct base of the horns. 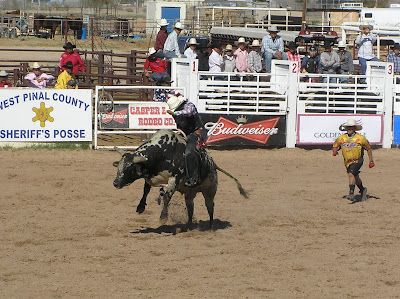 Next was the bull riding. There were only 8 brave cowboys who attempted this. One did stay on the required 8 seconds. Most were thrown off when they were barely out of the pen. 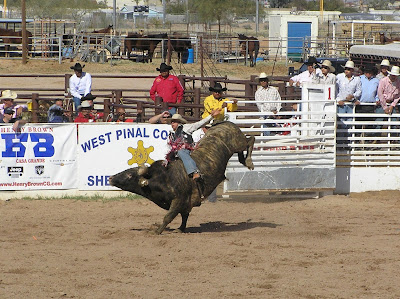 These bulls are hugh. After the cowboys were thrown off the bull runs loose and several cowboys on horseback attempt to get them into the exit shoot. They were being very stubborn and 4 of them were loose at the same time. It is frighting to watch as they charge the riders and the horses but the cowboys finally managed one by one to get them back to the pens.