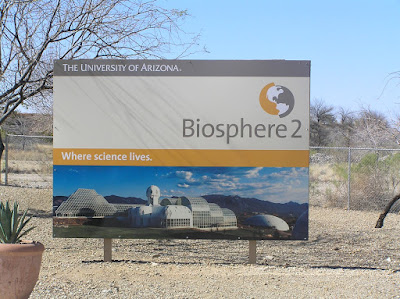 The best way to explain this is to write what was on a sign at the entrance to the building.
Biosphere 2 is one of the largest greenhouses in the world, and one of the most remarkable structures ever built. It houses living organisms from five natural biomes comprising more than 1,000 species of plants and animals, research areas, and the human habitat. Beneath the greenhouse, miles of pipes, tubes, and wiring, wastewater tanks, and other facilities make up a "technosphere" designed to recreate the Earth's recycling functions. The dome shaped "lungs" are connected to the main structure by tunnels. They allow for expansion due to changes in pressure inside the greenhouse. The entire building is sealed off from the desert soil by a welded 500 ton, 1/8th-thick stainless steel liner. 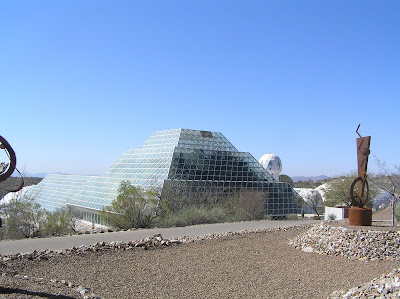 This is the greenhouse. In the early 1900's eight people were sealed in the habitat to measure survivability. The experiment lasted two years with the Biospherians being self-sustainable within the structure. They grew all their own food. Most of the animals have been removed. 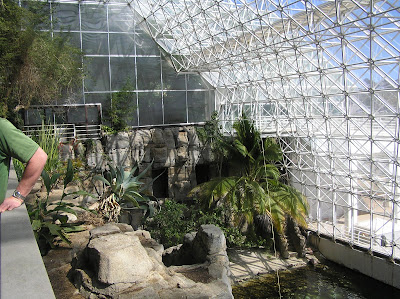 Part of the inside of the greenhouse area. The water in the lower right is the recreated ocean. It was actually water from an ocean and contained fish and other animals and organisms that would be in the ocean. There was even a small beach and 5" waves were made. I don't remember how large the greenhouse was but it took 5,600 panes of glass. 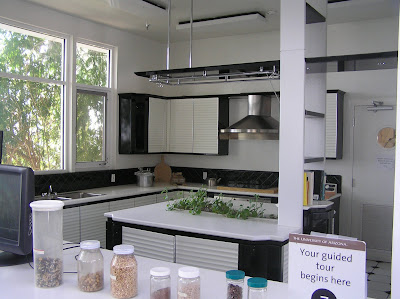 This is the kitchen the Biospherians used while the 2 year experiment was going on. 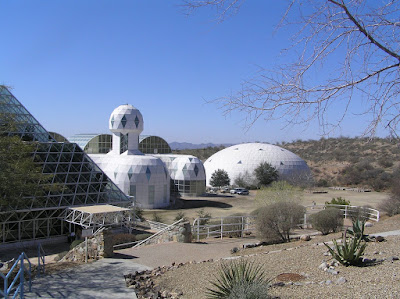 The dome to the right is one of the "lungs" used to regulate pressure in the greenhouse. The inside of the building was amazing to me but I just can't explain how they do it. The baffles inside contract and expand as the temperature varies.
The eight people who were in the experiment no longer talk to each other except for two couples who married after the experiment. The facility is now a tour area but they also continue to do scientific experiments mostly relating to carbon dioxide.
Posted by Karen & Harry Shaak at 4:10 PM