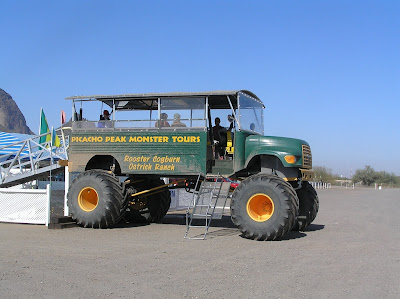 Saturday morning we started our day at the Rooster Cogburn Ostrich Ranch. This was a really fun place. A family run business they started in Oklahoma and as it grew they moved to Arizona. They now raise hundreds of Ostriches and ship the eggs all over the world. This monster truck is driven around the ranch by the owner's daughter and she really adds to the fun of the tour. As she drives around the ranch she stops at several areas throughout the ranch and explains all you ever want to know about ostriches. 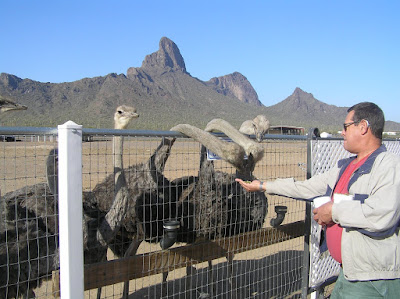 Here is Harry hand feeding the ostriches. They do not have teeth but they do pinch hard if they get your hand in their mouths. Ostriches are living dinosaurs and can live up to 70 years. They weight between 275 to 375 lbs. and are the only two-toed bird in the world. The egg laying season is from January to July and the hen will lay one egg every other day. The eggs weigh about 4 lbs each and are equal to about 18 chicken eggs. The shell is so thick and hard that our tour guide stood on one and it didn't break. 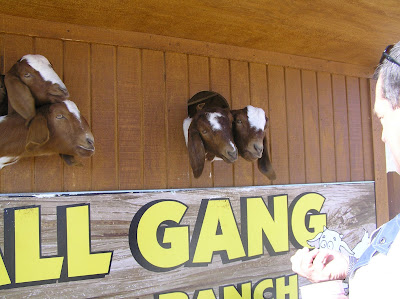 This was the funniest thing I ever saw. They are called the Hole in the Wall Gang. These goats push their heads out the holes to get the feed. Sometimes there is one and then another one pokes it's head out. One hole had three heads! And they all are reaching and wiggling to get to the food. 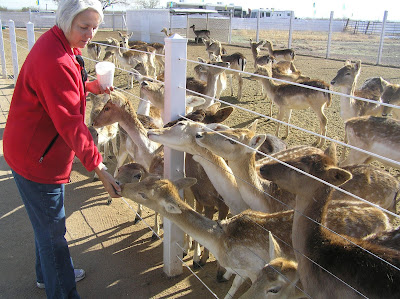 There is also a very large herd of dear. They are small and tame but so cute. You can't feed them fast enough 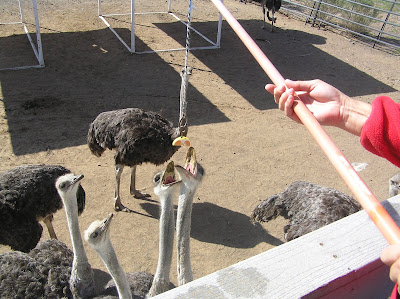 At the end of the tour the driver backs the monster truck up to a platform so the riders can walk out and do some Ostrich Fishin. Pieces of grapefruit are pierced on a nail and dangled over the ostrich so they stretch and bob for the fruit. They are like vultures! We really enjoyed this ranch and learned so much. 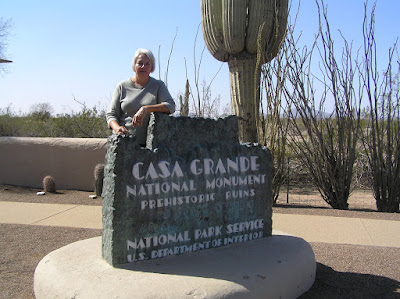 Our next stop was at the Casa Grande Ruins. These are ruins from the Hohokam people--the first known civilization in Arizona. The remains are scattered over a 2 acre area that is thought to have been a small village built in the 1300's. It was first discovered and recorded by missionaries from Europe in 1694. They named it Casa Grande---meaning big house---because of the main structure that is still standing. 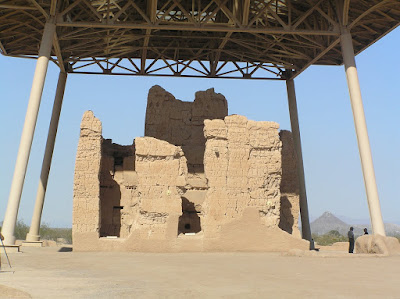 This is the largest building. It is a 35 foot tall, three story building. The walls are 4 foot thick at the base. The Hohokam used a subsoil concrete-like mix of sand, clay and calcium carbonate called caliche. When mixed with water this makes a muddy substance that drys hard like cement. To preserve the site a roof was built over it in 1903 and replaced in 1932. 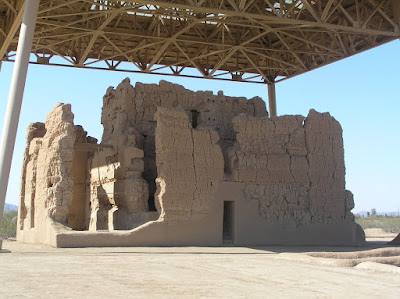 Note the 4 holes in the center top of the building. These opening align with the sun and the moon at significant times of the year--such as June 21st--the longest day of the year. There are other small holes and windows that also align with the sun and moon. It's believed the Hohokam devised a calender system based on movement of the sun and the moon and built this into their architecture. To me this is amazing considering they were prehistoric people. 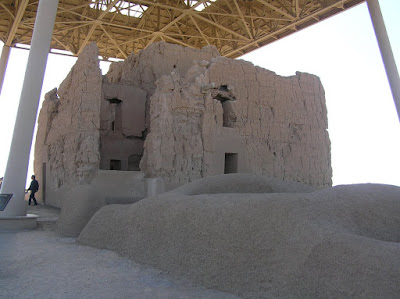 This is a side view of the building. The mounds in the front of the picture are walls of another building that have deteriorated. Most of the building did not have doors and a ladder was used to enter and exit through an opening several feet off the ground. 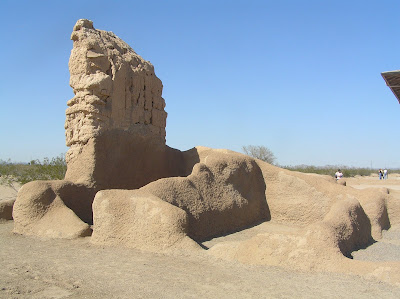 This is another wall that remains from one of the buildings. The park system has applied a matching cement-like covering over the walls to prevent further deterioration.
Sitting and listening to the volunteer explaining about the people and their lives I could picture a very primitive people going about their duties of the village. These people may have been prehistoric but they certainly had knowledge when building this "big house".