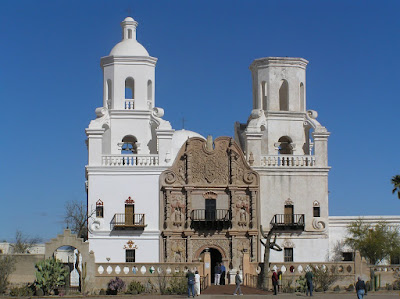 Monday was a full day of sight seeing. First we when to San Xavier del Bac. This is an old mission that was founded in 1692. The construction of the church started in 1783 and was completed in 1797 under the direction of the Franciscans. Some of the work was actually done by the priests. 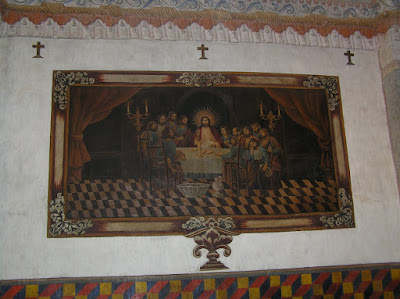 The walls are covered with hand painted pictures. The entire altar area is hand painted statues and wall paintings. It doesn't show up well in the pictures but looking at the paintings you can tell they are really old. This one of the Lord's Supper impressed me. 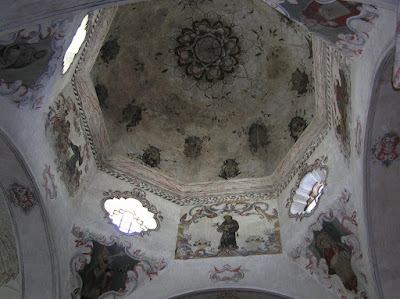 This is part of the ceiling---again all hand painted. The church is still used today for services. 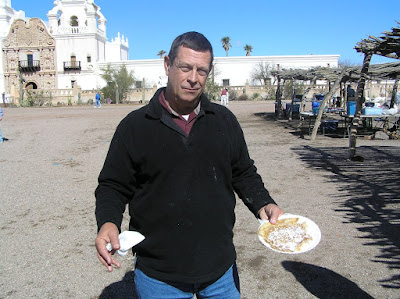 Outside in the parking lot several Mexican stands were set up selling crafts, jewelry and food. One of the specialties of the people is something called "fry bread". It is similar to our funnel cake only very flat and puffy. It is sprinkled with powdered sugar and drizzled with honey. It was so good and hit the spot as a mid-morning snack. 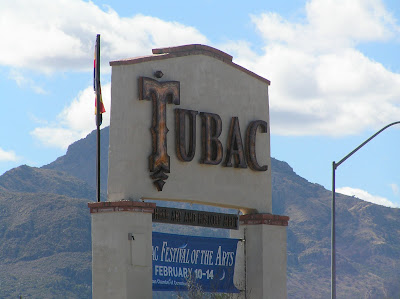 Then it was on to Tubac. Tubac was established in 1752 as a Spanish fort. It is now a historic park and includes a large shopping area with over 100 businesses. There are art galleries, artist studios and tons of gift shops. We spent much of our time in the kitchen store and the quilt shop. 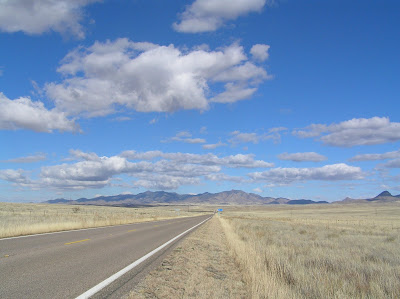 This is just one of the beautiful scenes as we drove along to our next stop--Tombstone. 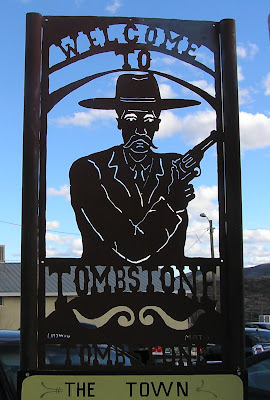 Tombstone is a popular tourist attraction. It is an old western town known for the shootout at "OK Corral". With it's dirt roads and stagecoach, old saloons, and cowboys walking the wooden porches one can really picture how it was back in the 1800's. 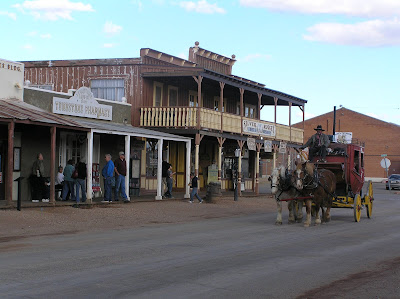 The stagecoach is for hire to take a ride up and down the main street. I love to hear the clip-clop of the horses hooves on the ground. 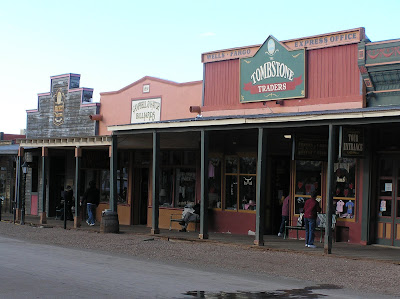 The buildings are all maintained in the old western style. 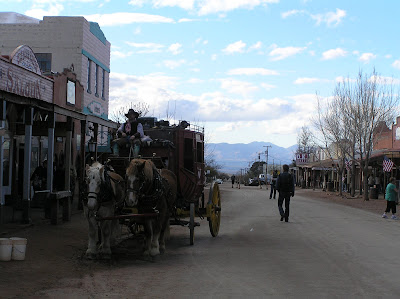 Everywhere you look around town you can see mountains in the background. 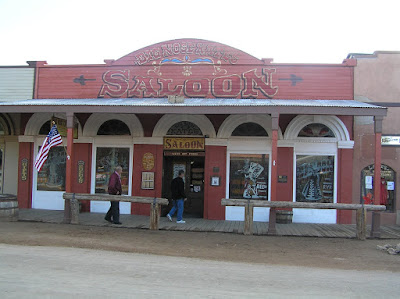 This is Harry and Jack going into Big Nose Kate's Saloon. After walking around town we decided to have dinner at the saloon. They are noted to have the best Reuben sandwich and hamburgers. It was very good and we certainly went away full. 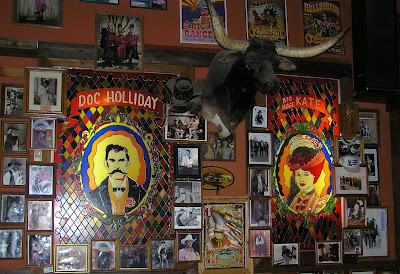 These are two of the large lighted pictures on the wall. Big Nose Kate was Doc Holliday's girlfriend. 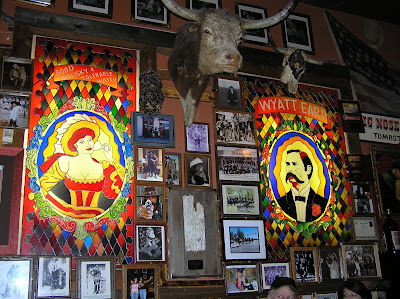 Wyatt Earp was very popular in this town. The other sign says,"Good whiskey--tolerable water." 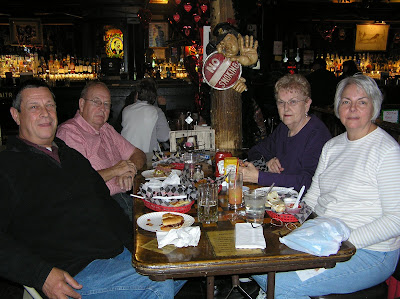 Here we are enjoying our food. Should have taken the picture before we started to show how big the burgers were. 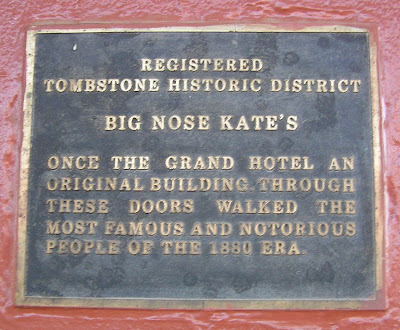 A plaque on the outside wall at the entrance. A second plaque stated it is a National Historic Site. 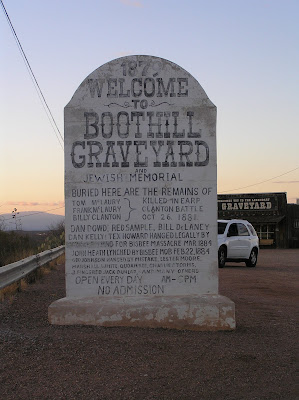 Leaving the town of Tombstone we past the Boothill Graveyard. Even though it was getting dark we wanted to stop to see the famous graves. 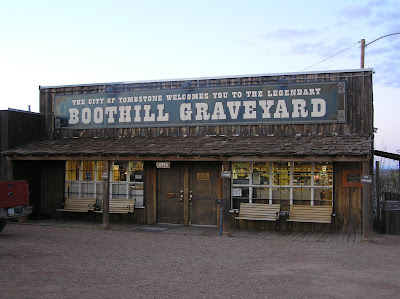 There is no admission fee and it was restored and is maintained by the people of Tombstone for it's historical importance. It was used between 1878 and 1884. 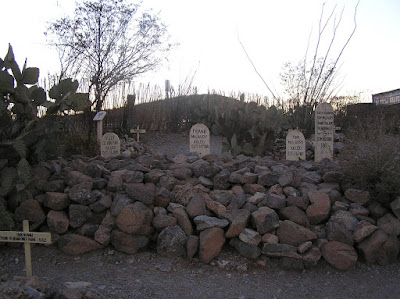 These are the graves of famous Billy Clanton, Tom McLaury and his brother Frank McLaury. They were killed in a gun battle with Wyatt Earp at the OK Corral in Oct. 1881. 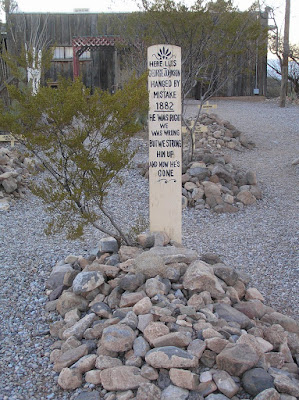 Harry liked this stone and the writing on it. "Here lies George Johnson. Hanged by mistake--1882. He was right---We was wrong. But we strung him up and now he's gone." 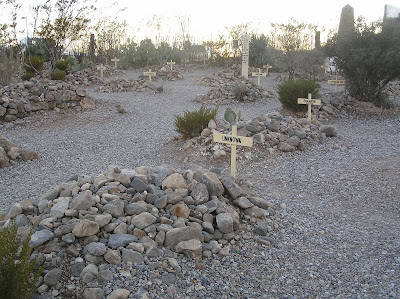 Many of the graves are marked as unknown.
Posted by Karen & Harry Shaak at 9:06 PM